E-Mail
I want to receive news on my email
Poll
What do you think of Iran on trip website?
Tomb of Cyrus the Great(Koorush Kabir) 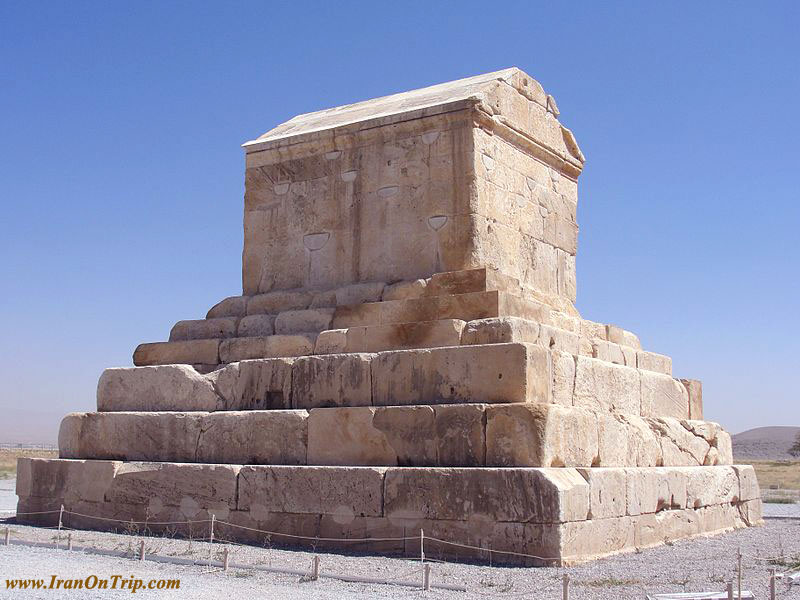 Tomb of Cyrus the Great in Pasargadae
The  Tomb of Cyrus the Great in Pasargadae is his burial place following his death in the summer of 530. Located in ancient Persia and in present day’s Fars province, it lies 43 kilometers from Persepolis and is one of Iran 's UNESCO World Heritage Sites. It is said to be the oldest base-isolated structure in the world. Despite having ruled over much of the ancient world, Cyrus the Great would design a tomb that depicts extreme simplicity and modesty when compared to those of other ancient kings and rulers.
The Tomb is simple in form, constructed of large, carefully dressed ashlar blocks set with precision and secured by dovetail clamps. It has six broad steps leading to the sepulcher. Whereas each of the three upper steps are 0.57 meters high, each of the lower ones are 1.05 meter high. The lowest step seems a bit taller as part of the foundation is exposed. On the northwest side a narrow doorway, 1.39 m high without the sill and 0.78 m wide, leads through a small passage to a chamber measuring 3.17 meters long, 2.11 meters wide and 2.11 meters high. The gabled stone roof is hollow. Around the Tomb were a series of columns although the original structure which they supported is no longer present.
The design of Cyrus' Tomb is credited to Mesopotamian or Elamite ziggurats, but the inner chamber is usually attributed to Urartu Tombs of an earlier period. The main decoration on the Tomb is a rosette design over the door within the gable. In general, the art and architecture found at Pasargadae exemplified the Persian synthesis of various traditions, drawing on precedents from Elam , Babylon , Assyria, and ancient Egypt , with the addition of some Anatolian influences.
Though there is no firm evidence identifying the Tomb as that of Cyrus, Greek historians tell us that Alexander III of Macedon believed it was. When Alexander looted and destroyed Persepolis , he paid a visit to the Tomb of Cyrus. Arrian, writing in the second century of the common era, recorded that Alexander commanded Aristobulus, one of his warriors, to enter the monument. Inside he found a golden bed, a table set with drinking vessels, a gold coffin, some ornaments studded with precious stones and an inscription on the Tomb. No trace of any such inscription survived and there is considerable disagreement to the exact wording of the text was. It is believed that it originally read “O man! I am Cyrus the Great, who gave the Persians an empire and was the king of Asia. Grudge me not therefore this monument.”
Another proposed, yet unconfirmed, theory is that the body of Cyrus (and his wife) did not lay inside the main chamber, but rather in a narrow crawl space that was discovered in 1959 in between the main chamber and pediment above. While the low ceiling of the structure’s interior can be attributed to the placement of this hollowed space, however, there is little evidence to suggest that the space actually housed any bodies. During the Islamic conquest of Iran , the Arab armies came upon the Tomb and planned to destroy it, considering it to be in violation of the tenets of Islam. The caretakers of the grave managed to convince the Arab command that the Tomb was not built to honor Cyrus, but instead housed the mother of King Solomon, thus sparing it from destruction. As a result, the inscription in the Tomb was replaced by a verse of the Quran, and the Tomb became known as the Tomb of the mother of Solomon.
Pasargadae was first archaeologically explored by the German archaeologist Ernst Herzfeld in 1905, and in one excavation season in 1928, together with his assistant Friedrich Krefter. Recent research on Pasargadae ’s structural engineering has shown that Achaemenid engineers built the city to withstand a severe earthquake, what would today be classified as 7.0 on the Richter magnitude scale. The foundations are classified as having a base isolation design, much like what is presently used in countries for the construction of facilities, such as nuclear power plants, that require insulation from the effects of seismic activity.
There has been growing concern regarding the Sivand Dam, named after the nearby town of Sivand . Its placement between both the ruins of Pasargadae and Persepolis has many archaeologists and Iranians worried that the dam will flood these UNESCO World Heritage sites, although scientists involved with the construction say this is not obvious because the sites sit above the planned waterline. Of the two sites, Pasargadae is the one considered the most threatened. Of broadly shared concern to archaeologists is the effect of the increase in humidity caused by the lake. It is generally agreed that humidity created by it will speed up the destruction of Pasargadae.
Your feedback is extremely valuable to us, and will be useful for others.
So let us to have your comments.