E-Mail
I want to receive news on my email
Poll
What do you think of Iran on trip website?
Wonders of Iran: Badab Sourt 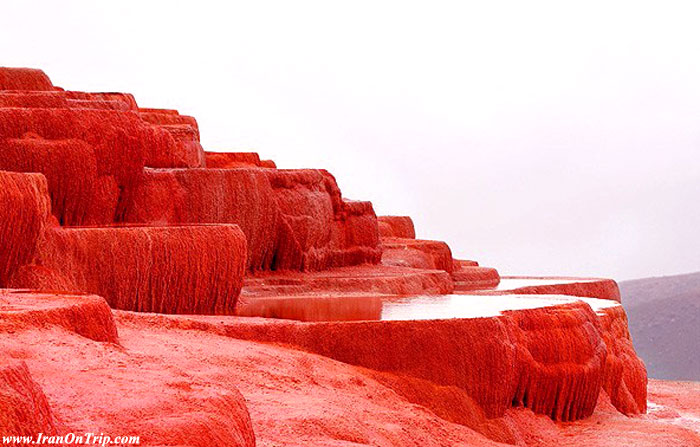 Location: in Mazandaran Province in northern Iran, 95 kilometres (59 mi) south of the city of Sari, and 7 kilometres (4.3 mi) west of Orost village.
Days of trip: (Without plane) 2-3 Days from Tehran to Tehran (Without heavy traffic you need 5-6 hr driving from Tehran to Badab-e Surt,Distance from Tehran to Badab-e Surt is 371 Km)
Attention: In holidays there is heavy traffic in all roads around Tehran.
Best time to visit: No Limit, Spring is the best time.
Daily time visit: No limit
Difficulty level: Moderate- 1-2 hr Walking
Requirements: (Depend on your plan) Guide or GPS track, water, food, warm and waterproof clothes and tent, waterproof shoes, headlamp
Legal permission need: No 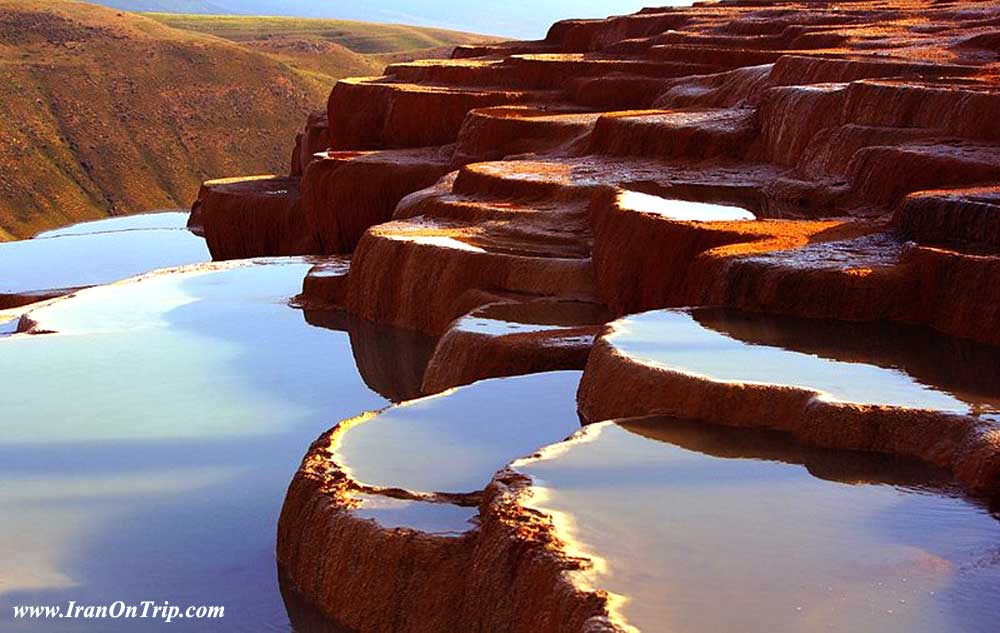 Between the world’s largest lake and the Alborz mountain range lies the beautiful Mazandaran province that attracts millions of Iranian and international tourists to its eye-catching nature scenery and fine weather.The Badab Sourt Natural Spring is located south of Sari and is considered one of the most incredible sights of its region. It is at a height of 1,841 meters above sea level and just west of the village of Orost.It is believed that the Spring was created during the Paleocene Era and at the same time as the latest folds in the Alborz mountain range.Badab is a Persian compound made of two words; Bad meaning 'gas' and ab meaning 'water.' Putting together Badab translates to gassed water referring to the fact that the springs' waters are carbonated mineral waters. 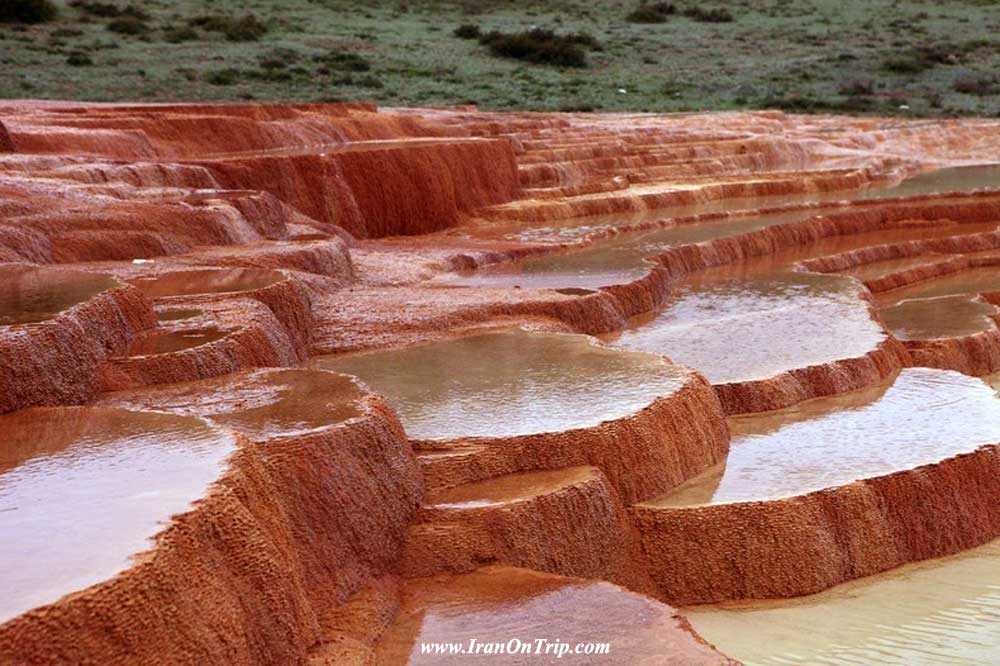 Sourt is an old name for the nearby Orost village and a Persian word meaning intensity. 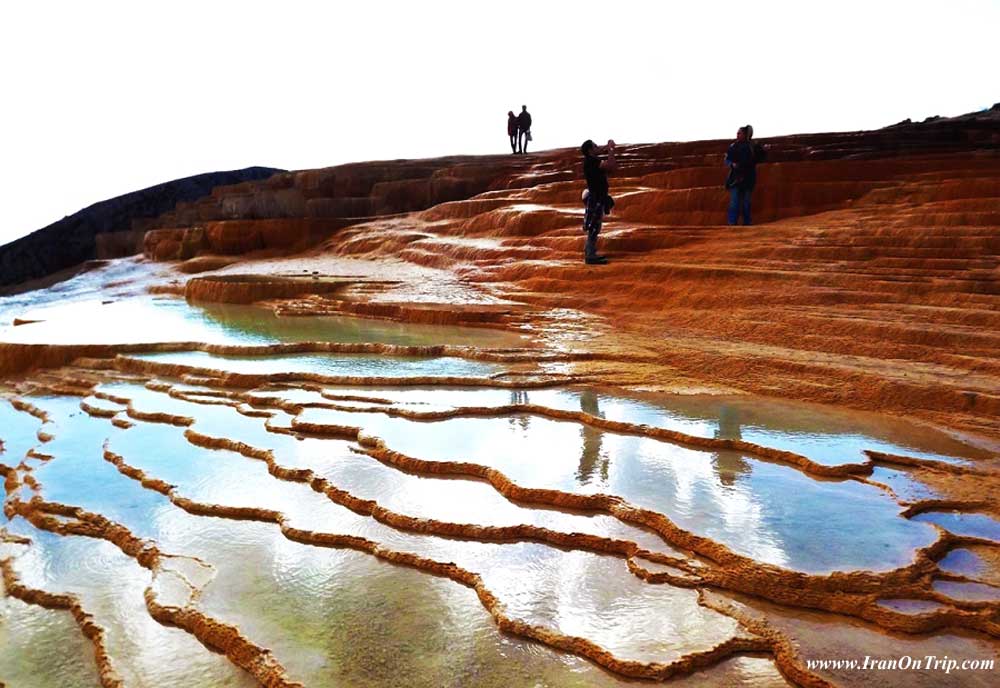 Badab Sourt is made of a range of stepped travertine terrace formations thousands of years ago, as flowing water from two hot mineral springs cooled and deposited carbonate minerals on the mountainside.The Badab Sourt Spring is actually comprised of two separate springs with completely different colored and scented water. The first spring contains very salty water that gathers in a small natural pool.During the summers locals swim in the pool and believe its water is useful for curing back aches, rheumatism and skin diseases. The second spring has a sour taste and is predominately orange mainly due to the large iron oxide sediments at its outlet. 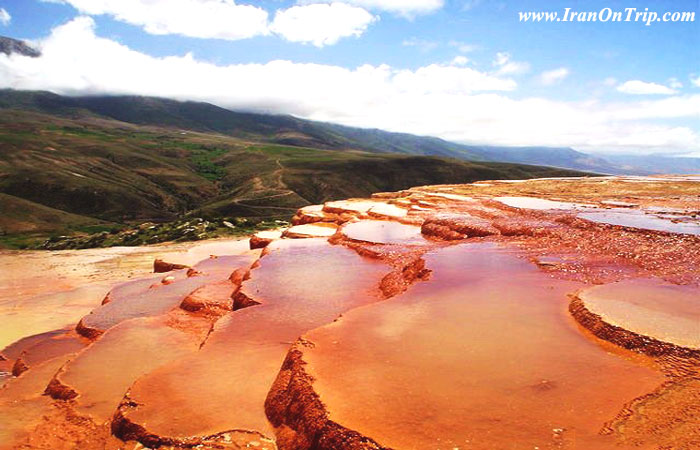 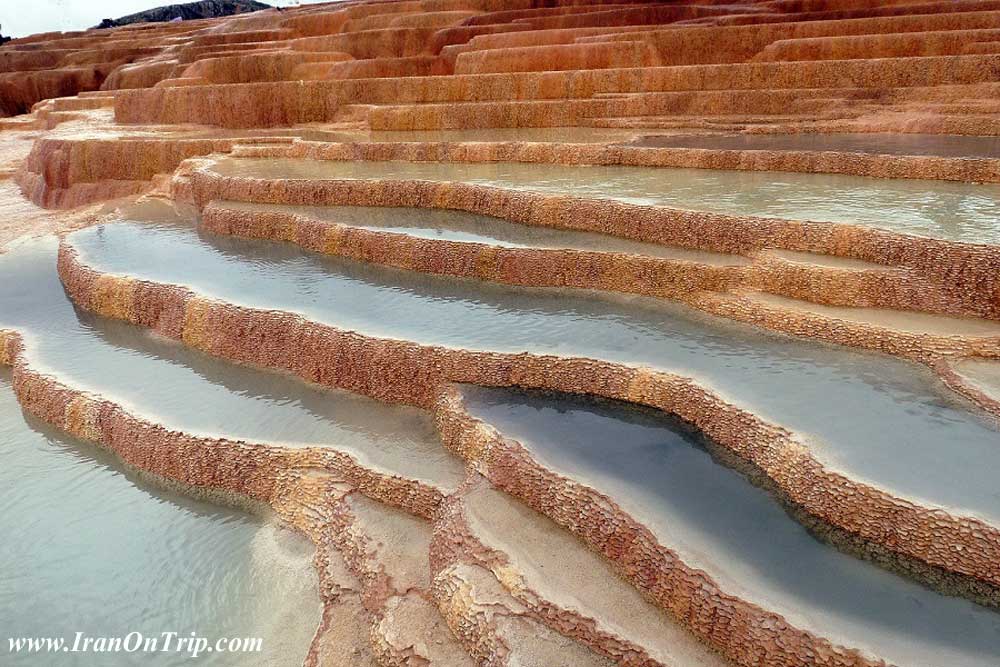 Iron carbonate and calcium carbonate are deposited by the water as soft jellies, but they eventually harden into travertine.As a result, over the course of thousands of years, water from Badab Sourt springs, which flow from the mountain, have combined to create a number of orange, yellow and red colored pools shaped as a natural staircase.The high level of salt in the springs keeps it from freezing during the winter.The surrounding vegetation to the north consists of pine trees forests while to the east we mainly see short trees and shrubs. To the west are rock quarries.

The Orost village and Badab Sourt Spring are easily accessible through Semnan with most of the way being paved and vehicles being capable of utilizing the dirt roads leading up to the spring.The best time to visit the area is undoubtedly during either sunrise or sunset when the sun’s orange reflection blends in perfectly with the colored spring. The Badab Sourt Spring has been registered as a national heritage site.There are similar sites in the US, New Zealand and Turkey from which only the Pammukkale in Turkey is a tourism hub.New Zealand's Pink and White Terraces and Te Tarata in Maori were considered a natural wonder until they were destroyed by a violent volcanic eruption in 1886.The geometrical areas of Yellowstone in the US Yellowstone National Park include several geyser basins as well as other geothermal features such as hot springs, mud pots and fumaroles.The travertine terraces at the American site are formed from limestone whose features constantly and quickly change due to the rapid rate of deposition. While many people visit Mazandaran to shed their exhaustion of city life relaxing on the beaches of the Caspian Sea or staying in the many jungle cottages, off the track sites such as Badab Sourt springs can also create a lovely memory in the minds of nature lovers who visit northern Iran. 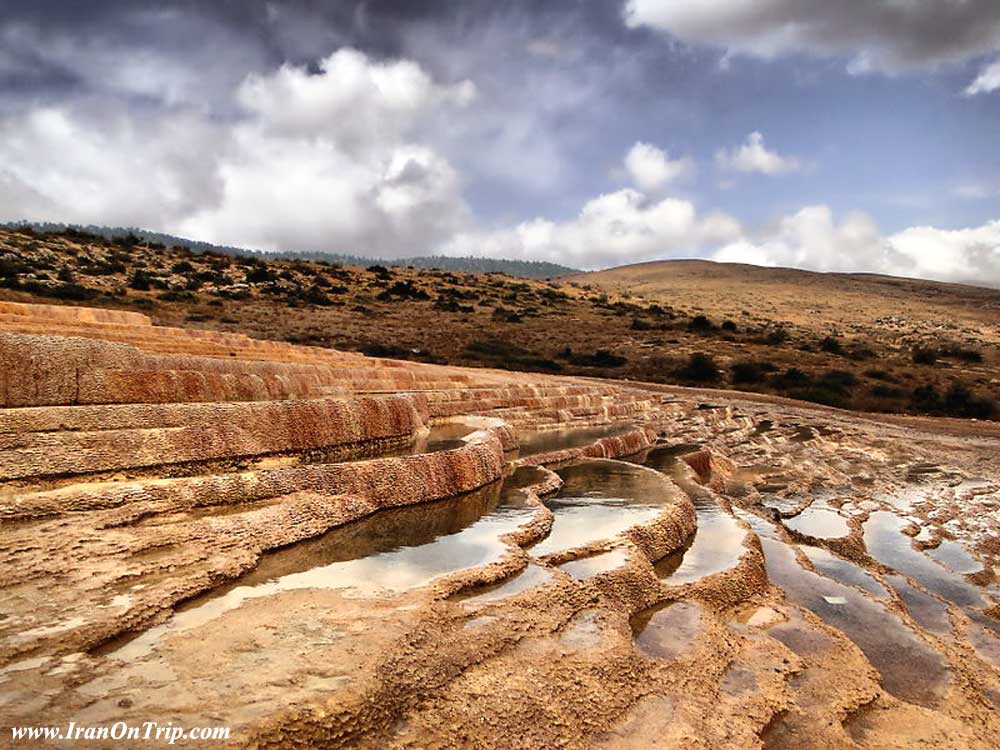 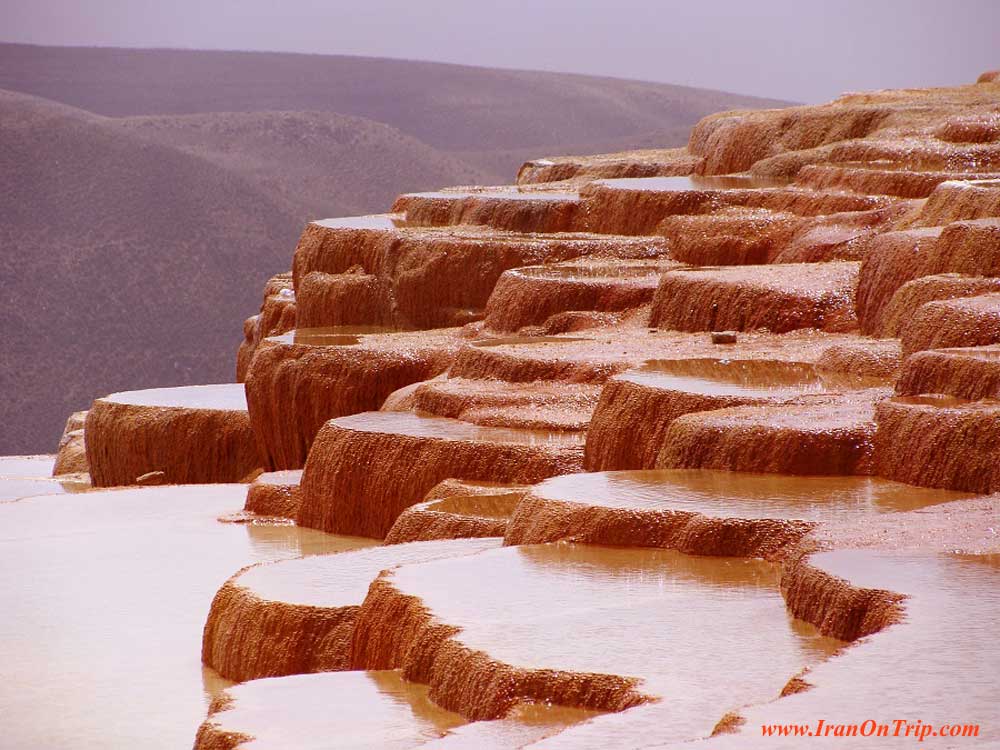