E-Mail
I want to receive news on my email
Poll
What do you think of Iran on trip website?
Meidan Emam, Esfahan (Naghshe-Jahan SQ) 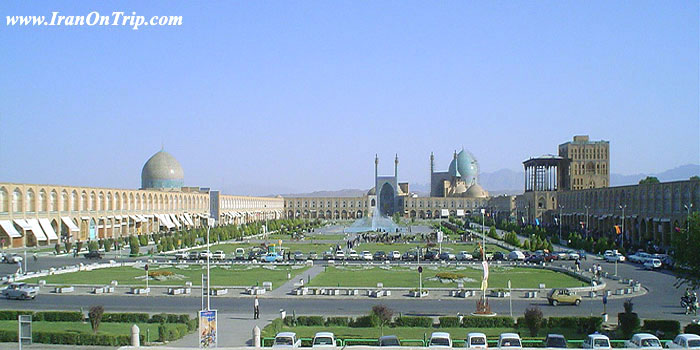 Meidan-e-Emam Khomeini : UNESCO Historical Site: Meidan-e-Emam This tourist attraction and historic site is a huge square with monuments on all its four sides along the two-storeyed arcades in Esfehan. What makes this site a top tourist attraction is the ultimately grand examples of Iranian architecture. Two mosques, a palace and a bazaar are making a breath-taking

Meidan Emam, Esfahan
Built by Shah Abbas I the Great at the beginning of the 17th century, and bordered on all sides by monumental buildings linked by a series of two-storeyed arcades, the site is known for the Royal Mosque, the Mosque of Sheykh Lotfollah, the magnificent Portico of Qaysariyyeh and the 15th-century Timurid palace. They are an impressive testimony to the level of social and cultural life in Persia during the Safavid era.The Royal Square of Esfahan is a monument of Persian socio-cultural life during the Safawid period (until 1722). It is an urban phenomenon which is an exception in Iran where the cities are ordinarily tightly parcelled without spatial fluidity, the exception being the interior courts of the caravanserais. It is an example of the form of naturally vulnerable urban architecture.The Shah of the Iranian dynasty of the Safawids, Abbas, who reigned from 1587 to 1628, chose as his capital Esfahan, which he magnificently embellished and remodelled. The centre of the city was accented by a vast Royal Square (Meidan-e Shah) which was so beautiful and so large that it was called 'The Image of the World'.It is bordered on each side by four monumental buildings linked by a series of two-storey arcades: to the north, the Portia of Qeyssariyeh (1602-19), to the south, the Royal Mosque (1612-30), to the east, the Mosque of Sheyx Loffollah (1602-18) and to the west, the pavilion of Ali Qapu, a small Timurid palace (15th century), enlarged and decorated by the shah and his successors.Of particular interest is the Royal Mosque, which is grafted on to the south side of the square by means of deep and immense sectioned porch. It is crowned by a half dome, whose interior walls are dressed with enamelled faïence mosaics, bound by two minarets, and prolonged to the south by an iwan (three-sided, vaulted hall open at one end), leading to an interior courtyard that describes a right angle. Thus, it is that, although it is in part on a north/south axis, the mosque is, in keeping with tradition, nonetheless, oriented north-east/south-east.The pavilion of Ali'Qapu forms the monumental entrance to the palace zone and to the royal gardens which extend behind it. Its apartments, which are completely decorated with paintings and have wide exterior openings, are renowned. On the square is a high portal (48 m), flanked by several storeys of rooms and crowned by a covered terrace (talar), whose refined roofing is carried by thin wooden columns.All of these architectural elements of the Meidan-e Shah, including the arcades, are adorned with a profusion of enamelled ceramic tiles with paintings, where the floral ornamental is dominant, flowering trees, ases, without a prejudice for the figured compositions in the style of Riza-i Abbasi, renowned both inside and outside of Persia, who was head of the school of painting at Esfahan during the reign of Shah Abbas. The Royal Mosque remains the most celebrated example of the colourful architecture which, in Iran, reached its height under the Safaw dynasty.The Meidan-e Shah was the heart of the Safawid capital. Its vast sandy esplanade was used for promenades, assembling troops, playing polo, celebrations and for public executions. On all sides, the arcades house shops. Above the portal of the large bazaar of Qeyssariyeh is a tribune that accommodates musicians giving public concerts. The talar of Ali Qapu communicates, from behind, with the throne room where the king occasionally received ambassadors.Read more
Source: UNESCO/CLT/WHC